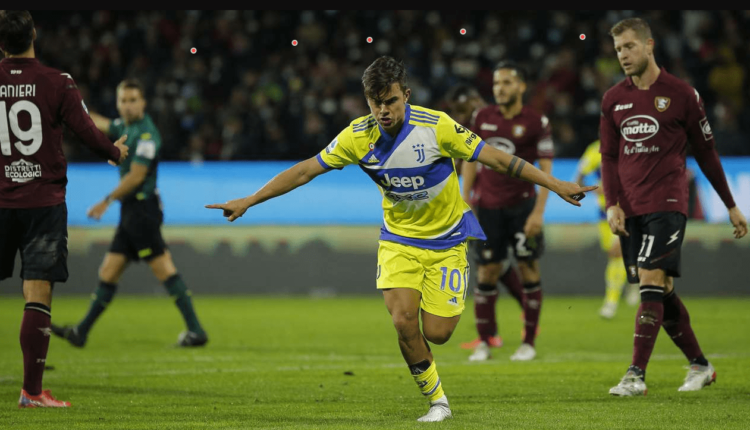 Juventus put their off-field concerns behind them with a comfortable 2-0 victory over Salernitana at the Stadio Arechi. A goal in each half kept the ‘Old Lady’ within seven points of the top four.

Salernitana were victorious the last time these two faced off, but that was over 20 years ago, and for all of the Bianconieri’s recent struggles, they were in control from minute one. Dejan Kulusevski was heavily involved, coming yards away from opening the scoring inside the first ten minutes, and he atoned for that missed chance by playing his part in the visitors’ opening goal. It arrived after 21 minutes of one-way traffic, when Paulo Dybala played an intricate one-two with Kulusevski before rifling his shot into the bottom corner.

Massimiliano Allegri’s side had the ball in the net just minutes later, as Giorgio Chiellini tapped-in following a ferocious free-kick from Juan Cuadrado. However, following a lengthy VAR review, the goal was chalked off, as Moise Kean was offside from the set-piece. Salernitana lived to fight another day, but nothing they tried could get them out of their own half for any real period of time.

The hosts came out after the break with a renewed sense of optimism, and their best chance of an equaliser came through Luca Ranieri, who had ghosted into the box unmarked before striking his effort against the post. That chance seemed to work as a wake-up call for the ‘Old Lady’, who doubled their lead on the 70-minute mark. Federico Bernardeschi’s cross from the left found Álvaro Morata, who somehow managed to place his finish through the legs of Vid Belec. The Spaniard had produced a finish of outrageous quality to score for the first time in September in Serie A, just moments after being brought on by Allegri.

Salernitana could offer nothing to stage a late fightback, and nearly conceded a third in the final moments, only to see Dybala blaze a penalty over the crossbar. The newcomers remain rock bottom of Serie A having picked up just one point from their last five league games. Meanwhile, Juventus picked up a hugely important victory, after a dismal week both on and off the field threatened to send their season into a tailspin.