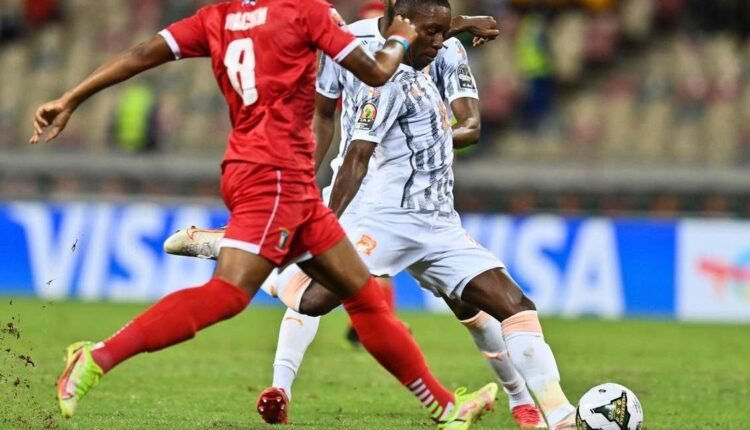 The two sides had the opportunity to take an advantage in Group E, following defending champions Algeria and Sierra Leone’s 0-0 draw in the opening group game yesterday. Ivory Coast got off to a dream start when former Premier League winger Gradel rocketed the ball into the top-right hand corner in the 5th minute after the ball fell to him on the edge of the area. This marked Gradel’s 16th international goal and his fourth at an AFCON tournament.

Patrice Beaumelle’s team, who last won AFCON in 2015, played full of confidence despite heading into the tournament on the back of a defeat to Cameroon in World Cup Qualifying. However, they were pegged back in the latter stages of the first half by the ‘Nzalang Nacional’ and almost fell victim to a crucial VAR decision just before HT when the ball appeared to strike the hand of an Ivory Coast defender inside the box. The check was completed, and controversially, a penalty was not given.

The second half started as the first ended with Equatorial Guinea applying the pressure. Dorian Jr. and Iban Salvador had opportunities to pull level but saw their efforts both go wide of the left post. Ivory Coast weathered the early storm and eventually found themselves probing, but Gradel and Maxwel Cornet were thwarted by a resolute defence. Juan Micha’s side, who had qualified for the tournament for the first time since 2015, were no pushovers and continued to threaten as they pushed for an equaliser.

Ivory Coast had a firm foothold on the game in the final stages of the second half and almost extended their lead late on as Ibrahim Sangaré’s left foot curler was denied by Manuel Sapunga. Victory for ‘Les Éléphants’ sees them go top of Group E with three points., while Equatorial Guinea suffered their first defeat in six.