Hertha Berlin’s Bundesliga survival hopes hit a snag in the form of a 2-1 away defeat to Bayer Leverkusen. A fourth loss in five games sinks the Berliners into an automatic relegation spot with just six games remaining to rescue themselves.

With Hertha’s survival hopes riding on the final six games of the campaign, any points taken at the home of top-four candidates will be seen as a bonus for the club from the capital. However, their luck ran out 10 minutes from the HT break when Moussa Diaby picked out Lucas Alario in the box, where the striker turned and fired home with aplomb to give the hosts a lead late in the half. It quickly went from bad to worse for Hertha when Diaby registered his second assist by picking out fellow winger Karim Bellarabi just shy of the penalty spot, and the German dispatched his shot low and hard to double Leverkusen’s lead.

Dramatically, the hosts’ lead was cut in half three minutes from HT. A Maximilian Mittelstädt cross found Vladimír Darida on the far side of the home side’s 18-yard-box, and the winger fired a volley into the back of the net on the bounce to give Hertha a way back into the match. ‘Die Werkself’ pushed to extend their lead and put the game to bed, but a flurry of chances went begging, keeping ‘Die Alte Dame’ within touching distance of a result.

Gerardo Seoane’s men showed fantastic professionalism in seeing the final minutes of the game out without any real threat on their goal, ensuring they collected all three important points. With their top four hopes hanging in the balance, it was the perfect time for Leverkusen to snap their five game winless streak against Hertha, extending their lead over fourth place to six points for the time being. 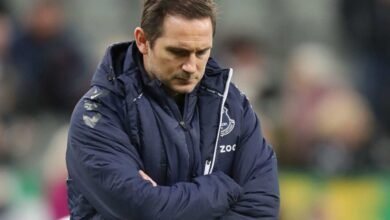 Frank Lampard, the manager of Everton, has stated that he is not concerned about the possibility of being sacked